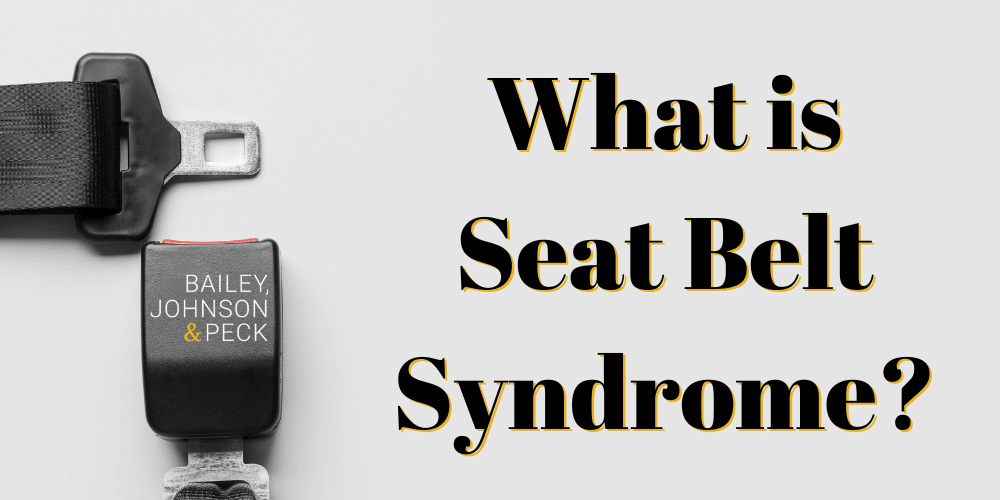 Seat belts made their way into American cars in the 1950s. For a short period of time, people actually believed that seatbelts were causing more injuries–after all, more and more people were ending up in the hospital after car accidents. What people soon realized was that while there were more people in the hospital, there were fewer people in the morgue after an accident.

Seat belts may save lives, but they can also cause additional injuries during a car accident. Seat belts have to be strong enough to keep you restrained during a jostling accident. This often means that seat belts in combination with force can cause injuries as it’s protecting you. These injuries can cause seat belt syndrome. Wearing a seat belt can’t be avoided–after all, New York law requires it. So what happens when you or someone you love sustains injuries from a seat belt? At Bailey, Johnson & Peck, our attorneys can help.
If you or a loved one sustained seat belt injuries in a car accident due to someone else’s negligence, you are entitled to financial compensation. The New York personal injury attorneys at Bailey, Johnson & Peck can help you recover compensation for your injuries. Call us today at 518-456-0082 to schedule a free consultation with an experienced member of our team.

Even though seat belts were invented in the 19th century, they didn’t gain much traction in America until the 1950s. Even then, Americans were indifferent to them. At that time, seat belts only went across the lap. The three-point design that we’re all familiar with today wasn’t invented until 1959. Federal regulations didn’t require auto manufacturers to have seat belts until 1968. Many Americans refused to use them still. By the end of 1979, only 11% of drivers were regularly using seat belts. New York was the first state to enact a mandatory seat belt law in 1984. Since then, lack of a seatbelt can result in being pulled over by police and ticketed for the offense. Unfortunately, seat belt usage can also contribute to injuries during an accident.

Seat belt injuries are not uncommon. In fact, as many as 30% of car accident victims seen in emergency rooms have signs of seat belt syndrome. This is not surprising, especially with New York having a 94% compliance rate with seat belt use. Seat-belted women are 47% more likely to sustain serious injuries from a car crash than men. Seeking immediate medical attention after any kind of motor vehicle crash is important to make sure you get full treatment for your injuries.

After any motor vehicle accident, everyone involved should seek medical attention right away. An auto accident can cause devastating injuries to anyone involved. Some injuries, like traumatic brain injuries and internal injuries, may take a few days to manifest. A seat belt injury can cause internal organ damage. Missed intestinal injuries can result in life-threatening conditions if not treated immediately. Some common seat belt-related injuries include:

If you have been involved in a motor vehicle crash and believe you have sustained seat belt injuries, seek medical attention immediately. Soft tissue injuries and visceral injuries often show no symptoms at first but can become life-threatening very quickly. After seeking medical attention, begin an attorney-client relationship with an attorney from Bailey, Johnson & Peck. Let us handle everything while you focus on recovering.

Symptoms of seat belt syndrome may not appear immediately after motor vehicle crashes. Damage to the soft tissues and muscle fibers often looks red and irritated as opposed to the black and blue hue of a bruise. A physical examination in the emergency department is necessary after any accident. This can prevent blunt force trauma from turning into fatal injuries.

The most obvious sign of seat belt syndrome injuries is known as the seatbelt sign. A seat belt sign most often presents as a mixture of abrasion and bruises in the general shape of the safety belt. Seat belt marks are often seen across the abdomen (caused by lap belts) and in a diagonal line across the hip, sternum, and shoulder.

How is Seat Belt Syndrome Diagnosed?

Seat belt syndrome can be diagnosed in a few different ways. X-rays and CT scans are common scans used to diagnose injuries that aren’t visible. Severe injuries, especially injuries to the abdominal wall or bowel perforation, can quickly become life-threatening. Getting a full medical evaluation can make sure you get an early diagnosis. This can ensure that you get the necessary treatment for a serious internal injury.

How Are Seat Belt Injuries Treated?

Treatment for seat belt injuries vary based on the type and severity of the injury. Some injuries require surgery and extensive recovery periods in a care facility or hospital. Other injuries may result in a referral to a pain management doctor or physical therapy while you heal.

Medical treatment is extremely expensive, and medical bills can quickly add up. If your injuries were caused by an at-fault driver, you have legal options available.

For more information about how much compensation you can receive in your case, contact the car accident lawyers at Bailey, Johnson & Peck today.

We understand that the last thing you want to do after a major accident is worry about your future. Let us take the burden off your shoulder. After establishing an attorney-client relationship with the personal injury attorneys at Bailey, Johnson & Peck, you can rest easy knowing that your case is in competent and capable hands. If you or a loved one was injured in a car wreck, contact us today at 518-456-0082.